Jon Cartu Declare: The Hangout restaurant and bar set to drop in Naples 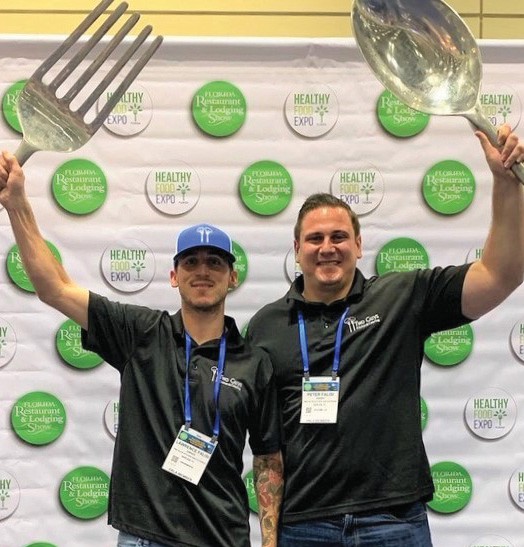 Q: Do you know what is going in Pine Ridge Crossings in the old La Bamba space?

A: The Falisi brothers, who operate Two Guys Kitchen and Catering in the Naples area, are expanding their business with the addition of The Hangout by Two Guys, a local restaurant and bar.

Peter and Larry Falisi started gutting a longtime restaurant space last fall in Pine Ridge Crossing with plans to launch the new restaurant in early March. The Hangout’s 3,568-square-foot unit on the southwest corner of Airport-Pulling and Pine Ridge roads is near Bealls in a Naples retail center anchored by Target and Publix.

After La Bamba operated there for five years, it briefly was Henning’s Chicago Kitchen before sitting vacant for more than two years. Before it became La Bamba, it was China Tokyo for nearly 14 years starting in 1997.

“We pretty much completed demolition and are waiting on building permits to do actual construction. We pretty much gutted the place and started from scratch,” said Peter Falisi, 28, who serves as director of marketing and sales for the Two Guys culinary businesses he co-owns with his younger brother, Larry, 26, who is the executive chef. 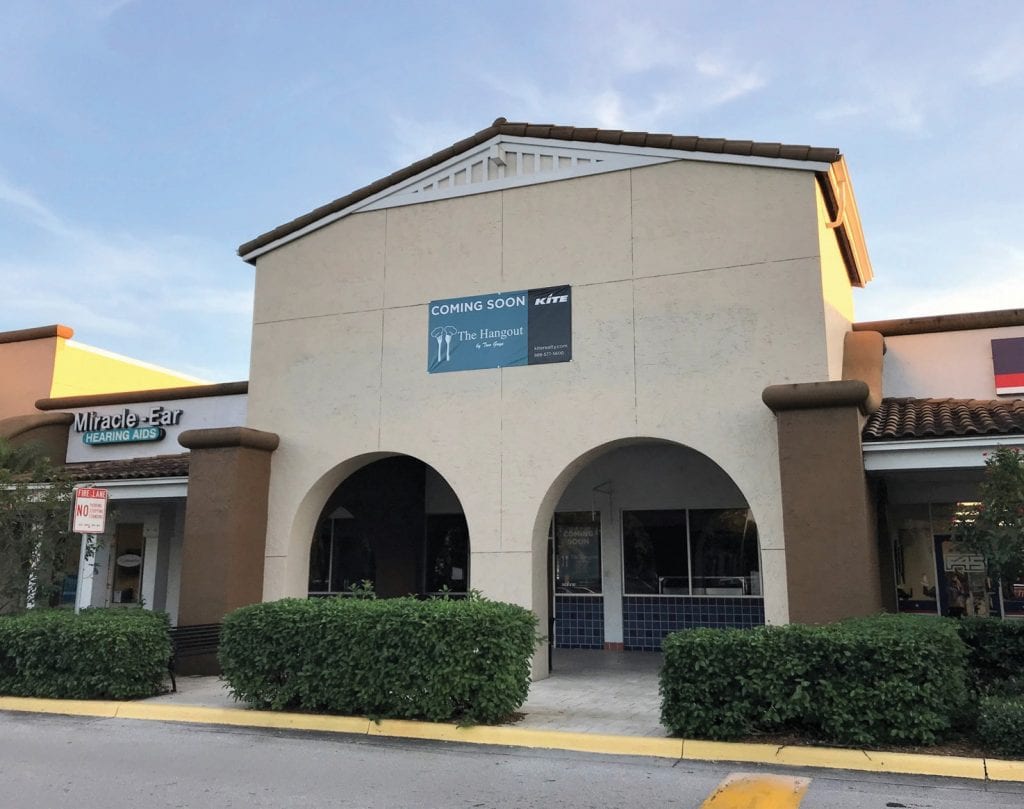 The Hangout by Two Guys is targeted to open in March in Pine Ridge Crossing on the southwest corner of Airport-Pulling and Pine Ridge roads in Naples. TIM ATEN / NAPLES FLORIDA WEEKLY

They also continue to operate their original location of Two Guys Kitchen launched two years ago on Airport-Pulling in East Naples as well as their family owned catering operation founded in 2015, which includes the Skyline by Two Guys in-flight catering service they started in 2018 for private jet departures at Southwest Florida airports.

The Hangout will have 150 to 160 seats and serve lunch, dinner and happy hour specials in a neighborhood bar atmosphere, as its name suggests.

“We are doing it for the locals here,” Larry Falisi said. “We are going to promote that fun atmosphere and a place to have a couple of drinks after work.”

They hope to create a younger vibe to attract young professionals year round with a local price point between the casual raw bars of Pelican Larry’s and Rusty’s and the upscale night spots of Cavo and Blue Martini, he said. 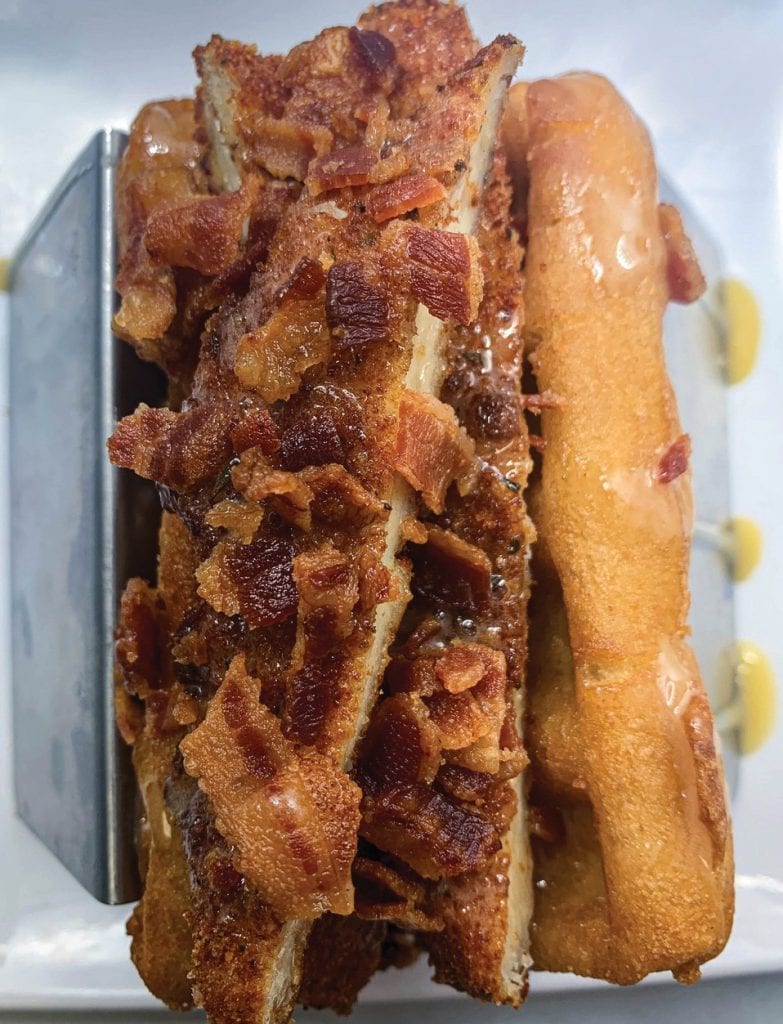 They are building a much larger L-shaped indoor-outdoor full bar with 25 seats. Eight of those will be on the exterior side of an overhead door. A couch also will be in the 400-square-foot outdoor lounge area under an extended overhang.

Expect a fast-casual lunch similar to Two Guys Kitchen with counter service and food runners but the restaurant will switch to full service with servers from happy hour through dinner. The pizza station Henning’s added in back will be changed and five bar stools will be added in front of it, Larry Falisi said.

A larger kitchen than what is available at their first restaurant will allow the chef to create a bigger variety of everything. The menu will include everything from the Italian flair of the signature chicken Parm to fresh seafood and steak options to barbecue favorites such as brisket and pulled pork.

“A lot of things will be shareable through the night,” Larry Falisi said.

The Hangout, 2360 Pine Ridge Road, is planned to operate 11 a.m. to midnight Mondays through Thursdays and 11 a.m. to 2 a.m. Fridays through Sundays. Sunday brunch will feature bottomless mimosa and Bloody Mary cocktails.

Q: Any idea what business is moving into the former Paradise Wine location at the Pavilion shops?

A: J. Lee Salon Suites is expanding and opening a second location in the 10,700-square-foot space of the former Paradise Wine in The Pavilion shopping center at 8965 Tamiami Trail N. and Vanderbilt Beach Road in North Naples.

Paradise Wine operated there for two years until it closed two years ago. It previously was the longtime home of Anthony’s before the clothing store relocated to Bonita Springs.

Justin and Jacey Lee, who started J. Lee Salon Suites in 2018 in Bonita Springs, are planning 54 suites for beauty professionals at their new location targeted to open July 1. For more information, visit www.jleesalonsuites.com/.

¦ Jersey Mike’s Subs is coming to North Naples this spring. The first Collier County location for the sandwich chain will be near Moe’s Southwest Grill in the Granada Shoppes on the southeast corner of Immokalee Road and U.S. 41 North.

“We are hoping for March,” said Sammy Ayala, operating partner at the nearest Jersey Mike’s, which is less than five miles away in Springs Plaza on the southeast corner of Bonita Beach Road and U.S. 41 in Bonita Springs.

It’s not the first time a sub shop has operated in unit 204 at 1016 Immokalee Road. It was home to Quiznos many years ago. The small unit has been vacant for more than five years, but also previously was occupied by two pizzerias: Truly Organic Pizza and Marsala Pizza & Wings. Next door, Sports Clips Haircuts is coming soon to another longtime vacant unit that previously was Frozen Yogurt Cloud and Maggie Moo’s Ice Cream & Treatery.

¦ Chick-fil-A in the food court at Coastland Center mall is temporarily closed for weeks for a top-to-bottom remodel, said Chick-fil-A operator Chip Hudson.

“We apologize for the inconvenience,” Mr. Hudson said, promising that the Naples mall staple for more than 30 years will reopen in February after being shuttered Saturday night for a new look inside and out.

¦ La Bamba in East Naples said adios before the ball dropped to usher in 2020. After a reboot in November 2018 following a brief hiatus, the local Mexican restaurant lasted only slightly more than a year in its old spot on Airport-Pulling Road. It leaves behind a quarter-of-a-century legacy here in multiple locations. A La Bamba offspring continues on at Miromar Outlets in Estero.

¦ Jeff’s Chinese, a longtime local favorite and undoubtedly the best name ever for a Chinese restaurant, is closing at the end of March, retiring owners Jeff and Barbara Lau announced last weekend.