In February, Graham Dodds received word that the Kimpton Pittman Hotel was hiring for their head of culinary operations. The position at the new hotel, located in the historic Knights of Pythias Temple building in Deep Ellum, entailed overseeing in-room and banquet dining. It also included developing a menu for the adjoined New American restaurant Elm & Good. Dodds applied. He was a shoo-in for the role with a back pocket bristling with experience at some of Dallas’ most notable kitchens like Hibiscus, The Statler Hotel, Wayward Sons, and Central 214.

Dodds landed the job in mid-March. It was a promising start to his year. But then, three days later, COVID-19 smacked the nation upside the head, and life as we knew it was put on hold.

“I figured it was kind of off the table at that point,” Dodds says. He was residing in an RV at New Frontier Farm in Corsicana at the time. It was a living situation that was spurred on by unemployed and blithe spontaneity.

While staying at the farm, Dodds tackled an assortment of responsibilities. One such task was tending to vegetables. “I planted a sweet little garden with some herbs and tomatoes and peppers,” he says. “It took me, like, three weeks to do it. But when I finally did, it rained. Everything was going so well.”

But never count your spinach before it sprouts.

A teensy baby goat with a white coat and a pink nose named Clarissa had different plans for the crops. She had figured out how to open the gate with her head, and she trotted right in and helped herself to the goods. As Dodds approached the scene of the crime, Clarissa scuttled away with a belly full of his hard work.

“It literally seemed like it took a bite out of every single one of the plants and then pulled some of them up. For only being in there for 10 minutes, it caused a lot of destruction,” he says.

It was another unforeseen setback, but hardly catastrophic.

In fact, Dodds’ position with Kimpton was never taken off the table like he had anticipated. Maybe he no longer had a garden, but he still had a job. The chef spent a few weeks commuting into Dallas, and then eventually just moved back. That way there was less traffic to sit in — and fewer goats to chase. 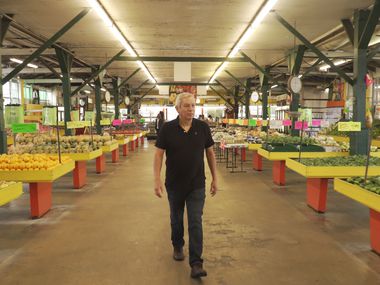 Elm & Good is now open. And Dodds notes that the restaurant is following strict COVID-19 guidelines. “Staff is wearing masks and everybody’s temperature is taken every day,” he says. “But it’s still a hard time right now.”

The past six months have been trying. The pandemic has taken a toll on the economy, people’s liveliness, their health. And for many, seeking comfort through food has provided a momentary escape. While it’s imperative to support local restaurants right now ― even if it’s by ordering dishes to-go, which you can now do at Elm & Good ― cooking at home can be especially appeasing. There’s excitement in the sizzling. And release in the chopping and churning. And pleasure in the aromas that swirl into the atmosphere and fill your kitchen.

For this series, we’re reaching out to people whose livelihoods rely on cooking for Dallas. And we’re asking them to share recipes, which people can make at home, in hopes that it delivers a delicious slice of relief. Sure, life has its challenges. And there will always be goats. But with enough love and perseverance, even the most damaged gardens can regrow.

Tie on an apron, roll up your sleeves, take a deep breath, and pour your heart into it. If we really do reap what we sow, you’re in for a treat.

These tidbits used to accompany Dodds’ catfish setup at Wayward Sons and Overeasy, and they are now a popular standalone appetizer at Elm & Good. The recipe was passed to Dodds by his pal Michael Bittner.

“We would go out to Lake Tawakoni and have a fish fry, and he made these to go with the fish — best hushpuppies ever,” Dodds says. “I recommend using the self-rising flour and cornmeal. You can make your own by adding leavening, but I feel like the self-rising products make this recipe perfect each time. There is somewhat of a wild card with the size of the onions — large ones are the way to go, not extra-large.”

1/2 pound okra, split in half and charred in a cast iron pan and chopped small

Combine the eggs, buttermilk and onion puree in a separate bowl, then gently fold in the dry ingredients and okra.

In a large pot or Dutch oven, pour enough oil to reach a depth of 3 inches. Heat the oil to 350 F. Form batter into balls a bit larger than a golf ball, drop in fryer and cook for about 6 minutes, or until done in the middle.

Combine all ingredients in a mixing bowl until smooth.

Adjust seasoning if necessary and store in refrigerator.